Just today, my shiny new BlackBerry Z10 Limited Edition arrived. How did I get it? In October 2012 there were this series of events called BlackBerry Jam Sessions that were sort of a hackathon series to make apps for the new BlackBerry 10 OS platform, using either their Native SDK, the Android SDK (limited to 2.3.4) or Adobe AIR. Of course, I was interested in participating because I sorta knew how to develop for Android!

(Just as a note, the blog’s Z10Z name is absolutely unrelated to the Z10 name of the phone)

I think that the platform overall is nice, but I believe it came too late. BlackBerry took too long to get into the touchscreen smartphone market, with several monthly, or even yearly delays. They were kings with the physical keyboard models that predated current smartphones (everyone I knew were crazy about these) but were slowly phased out and forgotten by the incoming wave of Apple, Android and even Windows smartphones, being relegated to the corporate environment, and even there being replaced by this new technologies. In the end they came new to a place were others were already very mature, without bringing much new stuff, and requiring people to develop for yet another platform, so in my opinion they should have become a complete fork of Android and support immediately its full, huge application base, instead of giving limited support with some porting tools.

Anyway, lets talk about the hackathon! In our team we developed an app for helping children and adolescents learn formulas from several mathematics, geometry, chemistry and other sciences topics, by inputting values into visual representations of whatever a formula was about, and finding the missing values, together with an explanation of such formulas. I was in charge of the software design and programming of the app, and putting together its visual interface.

Some friends did the gathering of resources (images, formulas), others did the pitch (all the talk about how it worked, the idea, the business model, guided by an awesomely crafted presentation) and I did the coding and visual structuring. In the end, we won the Best Application Design award! 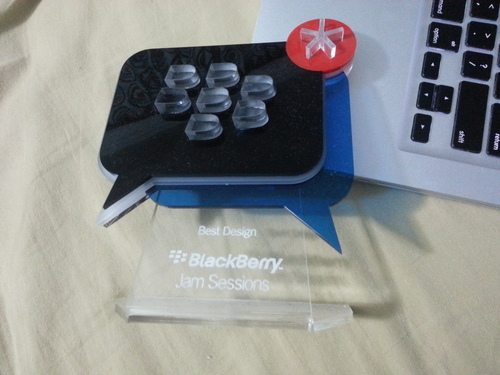 There were 5 awards, each one with a trophy, and a backpack. The Best App award took home a Playbook, which I think they sold, because well, selling it and dividing cash is better than arguing who should keep the tablet.

But it didn’t stop there! They gave every contestant a Blackberry Dev Alpha B unit, with the promise that if people had an app developed and approved into the Blackberry App World before January 21st (later extended until February 28th) they would qualify for exchanging the Dev Alpha B unit for a Red Limited Edition version of the finished (retail) Z10.

The application I had submitted was a port of the Android version of CraZe! But I was kinda sad because at the day of the contest they didn’t say anything about the application submitted having to be one per person, I thought it would suffice for everyone in the team to exchange their Dev Alpha B for the Z10, so some people were unable to submit and get an application approved by the store and got stuck with the beta phone. 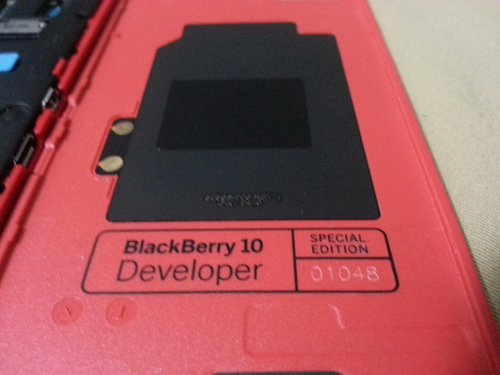 1048 out of 12000 ever made! Many were eager to sell the phone, I won’t (even though I won’t use it for the foreseeable future because I have a new Galaxy S3), but I’ll keep it as some crown of achievement!