I’ve never had some sort of online publicity strategy. Haven’t paid for publicity, my strategy has been very local, as in sharing stuff to my social circle, installing it myself to my friends’ devices (who then install it to their friends and families), and sneakily opening it at random tech stores tablets, phones, and computers. Locally it’s a blast doing that, but that doesn’t scale up. I’ve never been sure of how to go around trying to promote massively this kind of app in the online world.

One attempt I did make was nearly 1~2 years ago, I created an Instagram for drawings made with the Web / Android apps, posting images with hashtags hoping for people to find them. Just the few pictures containing hashtags I had posted on Instagram made its way across several users, resulting not only in people knowing about it and liking the pictures, but also some people creating awesome stuff with it, even on a constant basis, sometimes with the hashtags, the best example being:

This is a very peculiar user. From what I gather, the name is Eduardo Benko, a DJ from Sao Paulo, Brazil. His drawings are very crazy and attentive to detail, also mixing a lot of parameters, brushes and palettes in cool ways! Here are some drawings of his, made with the app.

I feel a warm lovely feeling when I read in the reviews about all kinds of people using the application. People waiting in queues. People using it during show intermissions. People using it at parties. People using it for homework / projects. People using to pass time. But that feeling intensifies when its people looking for spiritual inspiration, and also children and elderly people, which are the most free in mind and eager to express themselves, which is related to the next user I found, Athaena.

She has a particular sensitivity for nature and artistic stuff, but also has an awesome little cousin who drew these psychedelic butterflies ~ papillons! I had heard of children using it, but never seen the results of such beautiful interaction. A kid does not expect to make something perfect, not even something for others to approve, they just want to make something as they want! Like Picasso once said,

‘Every child is an artist, the problem is how to remain one when growing up’.

Perhaps when growing up, we start seeking to make things in a way that approaches ‘perfection’ (perhaps a false perfection defined by society standards), doing ‘rational’ stuff, and while at that also looking for others to approve and like what we do, losing the essence of just doing things how we feel like doing them.

So I was fooling around with this #crazeapp when my 5 year old little cousin Shana told me that she wanted to draw a butterfly. This is what she came up with #amazinglightchild #mandala #creativity

The current distribution of users is as follows. Note that even with 50.000 lifetime installs, only near 10.000 have been retained. I’m looking for ways to improve this. 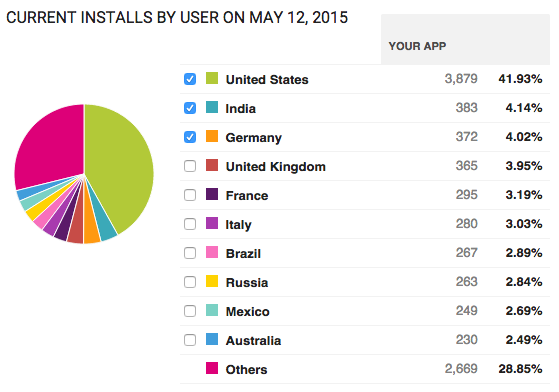 Now, these are some of my favorite comments :-)

But then, not is perfect. The most common reason of dislike (made evident in the ratings comments) is the configuration UI, which admittedly, is a hack. I believe this is the biggest friction for using the app. Its a very simple and rudimentary UI, perhaps too much, as many options are text or numbers (and it’s an artistic app which would benefit a lot from a rich graphical interface), so improving the user experience has to be as important as creating new cool features.

Well, thats it for now, I hope I keep finding people using CraZe around the world :-)